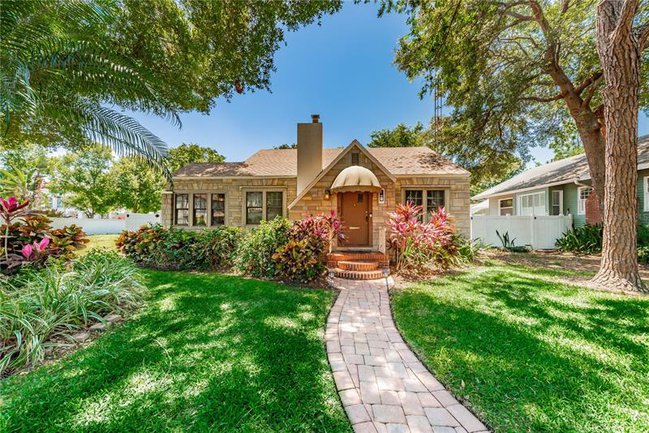 Crescent Lake lies at the center of the neighborhood, surrounded by a manicured 56-acre public park. Around the lake are the St Pete’s famed Banyan Trees, a living “jungle gym” for the little ones. To the south is Huggins-Stengel Field, once spring training home for the New York Yankees (Joe DiMaggio and Mickey Mantle played here!) and now serving the community for high school and some collegiate teams. Further south still is the neighborhood’s most visible landmark, a 1923 water tower, repainted as a giant salt water aquarium by local muralist, Tom Stovall.

East and west of the park the residential streets, some with brick paving and hex-block sidewalks, mature Florida trees, and a diverse mix of house styles including Foursquare, Craftsman, Mediterranean Revival, and Art Deco. Eighth Street has a particularly fine collection of 1920’s Tudor houses. Along the lake are some early ranch-type houses dating from the late 1930’s. Beyond the residential sections lie busy 4th and 9th (Dr. M. L. King) Streets North. New businesses along these streets are rapidly transforming our area into an antique shopper’s Mecca.

The Crescent Lake Neighborhood is located one mile north of St. Petersburg’s central business district. We are a short drive from shopping, restaurants, medical facilities, waterfront parks and the interstate.

A cypress dugout canoe dredged from Crescent Lake in 1924, provided evidence of a Native American presence in the neighborhood. The canoe, now in the Museum of History, is thought to date from about 1800. In the 1870s and 1880s, settlers of European origin arrived and put the land to agricultural use, chiefly citrus groves. This way of life did not last long. With the completion of a streetcar line out 9th Street to 34th Avenue in 1914, the groves became valuable suburban property and subdividing began.

The opening of Crescent Lake Park in 1927, heightened the neighborhood’s appeal. The park was the brainchild of master developer Perry Snell, who acquired and held the necessary parcels until the city was able to buy them. Shortly after the park opened, the city built a ballfield for the New York Yankees at the south end, ensuring that national sports figures like Babe Ruth, Lou Gerhig and Joe DiMaggio would join a long list of local business and civic leaders who have been our neighbors.

The neighborhood acquired its final form just before World War II, when palm-lined drives went in alongside the lake. The building boom that gripped St. Petersburg and the nation immediately following that war quickly filled all remaining lots.

The Crescent Lake Neighborhood Association was formed in 1989, when a group of citizens, who met initially to discuss crime issues, decided there was scope for broader improvement. One of our first acts was to adopt Crescent Lake Park and begin planting trees to replace those lost to storms and disease. The group also joined the Neighborhood Conservation Program and Certificate of Inspection Program and ratified the 4th Street Corridor Plan.

In 1990, the association began to write a neighborhood plan. A city grant purchased technical support from the University of South Florida. City Council adopted the completed plan in 1995. The Crescent Lake Neighborhood Plan was first neighborhood-initiated adopted plan. Major projects such as entryway improvements and enhancement, landscaping, a fountain and observation decks at the lake, park expansion, and meeting hall remodeling are outlined in the neighborhood plan. The association’s calendar is always crowded. Besides producing and hand-delivering newsletters to 750 households each month, we hold a garage sale, lake cleanup, Spring picnic, Octoberfest, annual holiday party, and participate in such events and organization as CONA, Paint St. Pete Proud, Crime Watch, Adopt-A-Family, and the Parade of Neighborhoods.

The Neighborhood Partnership Grant Program has been instrumental in improving the neighborhood. Our first grant enabled us to produce a color marketing and informational brochure. A second grant, along with monies from Mercantile Bank, allowed us to hire USF’s Center for Community Design for technical support in writing our neighborhood plan. A project identified during the planning process, landscaping a broad median on 17th Avenue North, was completed with a third grant while the plan was in the final stages of preparation. The grants have been matched by hundreds of hours of volunteer labor also.

The data relating to real estate for sale on this web site comes in part from the MLS. Real estate listings held by brokerage firms other than Coldwell Banker are marked with the IDX logo and detailed information about them includes the name of the listing brokers. Disclaimer: All information deemed reliable but not guaranteed and should be independently verified. All properties are subject to prior sale, change or withdrawal. Neither listing broker(s) nor Coldwell Banker shall be responsible for any typographical errors, misinformation, misprints and shall be held totally harmless.
This data was last updated on: 06/23/21 01:36 PM. A full data refresh was last performed on: 06/22/21 06:28 PM.